When it comes to Indian ethnic wear, especially bottom wear, there are a plethora of options available for women. From heavy long flared skirts to different kinds of pants. We at Farida Gupta offer four main types of bottoms for Indian wear. Here is a glimpse into the details that separate each of them. Originally seen on revolutionary designer Coco Chanel in the 1920s, and later by avant-garde actress Katharine Hepburn in the 1930s, Palazzos first became popular in the 1960s.

In the sixties, many upscale restaurants and other establishments refused women wearing trousers to enter, and to bypass this imposition many modern women donned Palazzos and Culottes as evening wear because these silhouettes also resembled long skirts from afar.

Our rendition of the Palazzo is pretty much the same, clenched at the waist and flares out till the bottom, except that we give it an ethnic twist with the drawstrings and traditional hand-block printing. This silhouette is particularly comfortable and conducive to all seasons. 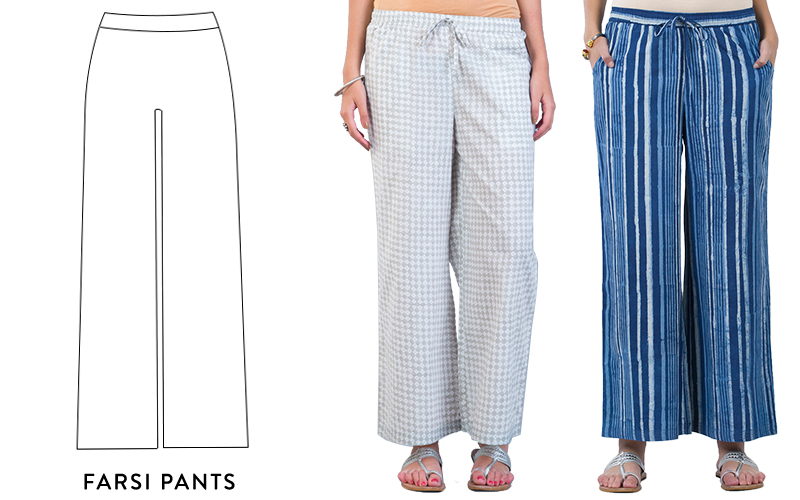 Farsi or Farshi pants as they are also known were mainly worn between the late 17th century and the early 20th century in the Muslim courts of Oudh or Awadh by royalty and other privileged women of the province of Uttar Pradesh.

Initially, the Farsi pants were a more elaborate version of the Gharara - fitted till above the knee and then flaring out. The length of these bottoms would be floor length (Farshi derived its name from ‘Farsh’ or floor).

However, with changing times, Farsis have evolved to fit the contemporary world and the lifestyles that come with it. The Farsi pants in our collection have a more bohemian feel to them. They are straight loose cotton drawstring pyjamas that sometimes also come with a pocket. Smart and comfy, our Farsi pants go wonderfully with most kurtas. 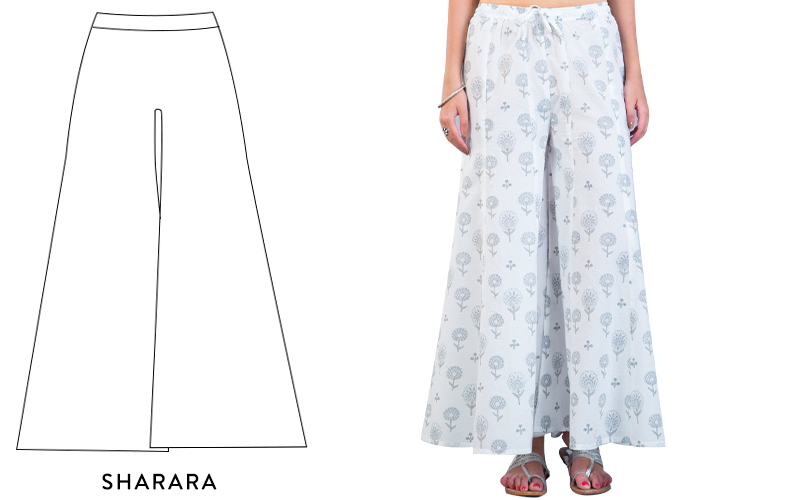 According to some, Shararas came into the picture during the Mughal era, while some claim they popped up in the 18th and 19th Century in Lucknow - the city of Nawabs. Teamed with a kurti and dupatta, Shararas have remained a popular outfit in north India till date.

Even in other countries like Bangladesh and Pakistan the outfit is still worn, albeit it’s more of occasion wear and bridal wear.

However, our version of the Sharara is more of casual / semi-casual wear as we wanted it to become a part of everyday fashion again. Typically a Sharara is a pair of long flowing pants which flares heavily waist-down. The flare is much wider than a palazzo, giving it an illusion of a full-length skirt or lehenga. The best part is our collection comes 100% cotton which makes it perfect for daily wear that's high on style and comfort. 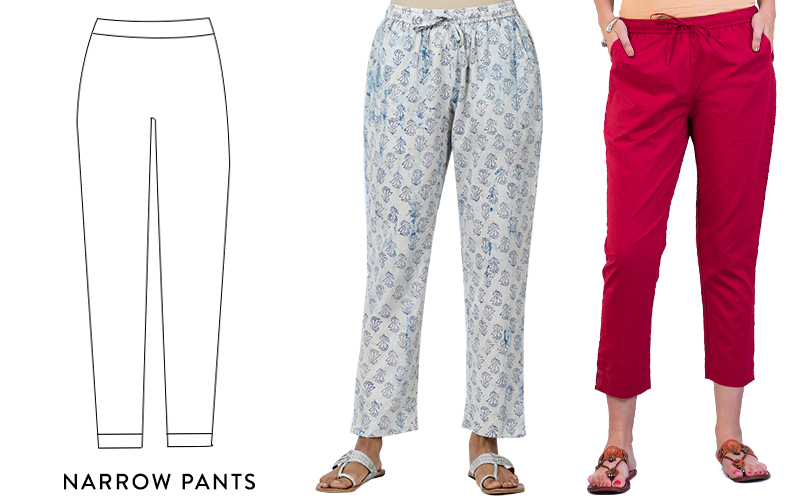 Narrow pants have been around since the early 19th century, but back then they were only supposed to be worn by men. It is only by the end of the 20th century that pants became acceptable to be worn by women, at least in the western world.

Over the years this particular style, Narrow pants, was tweaked a little depending on the current trend of the time and was known by many other names - drainpipes, stovepipes, tight pants, cigarette pants, pencil pants, skinny pants, gas pipes, and skinnies.

The Narrow pants that you will find in our collection are comfortable cotton bottoms, which have a slim fit. You can find a range of these in our selection. You can opt for a solid colour to mix and match with a kurta/top, or you can go with our printed pants that come with matching kurtas and dupattas.